How To Train For Wrestling

As with any sport, it is important to get a training routine setup that incorporates the movements and scenarios you will see on the field of competition. This will allow you to better prepare for future competition as an athlete. Specifically speaking, wrestling is a sport that can be unpredictable so you must be prepared for anything that an opponent might throw at you.

Training for wrestling more easily said then done. The most common type of training that wrestlers do would be running. This is most likely only being done because of the weight cutting involved with the sport and running seems to be the easiest way to cut weight for most wrestlers. However, if a wrestler is looking to get better at wrestling in general running should not be the only method of training.

More and more wrestling programs are now investing money towards freestyle/greco wrestling dummies. These dummies allow a wrestler to perfect and brush up on moves if there is no body around to practice with. There are many variations of wrestling dummies that are on the market today that tend to run between $300- $600 depending on the size and weight of the dummy.

Cardiovascular health is one of the biggest advantages a wrestler could ask for when wrestling an opponent. As stated before, running is a very effective way of staying healthy and in shape for the season. But running in itself can get repetitive and boring. To push yourself a little, invest in a weighted vest that either Velcro's or buckles around your torso. These also range in price depending on size and weight of the vest but usually run from $150-$400. Not to mention they can weigh as much as 25 pounds all the way to 150 pounds.

Speed is a huge component of wrestling due to all of the takedowns requiring short bursts of speed. Training for speed should be one of the top priorities for any wrestler. One of the many ways to train for speed is by doing speed ladders. You can either purchase a set of speed ladder ranging from $20-$70 or you can even just draw a row of 1 foot by 1 foot squares on asphalt. Either way will allow you to increase your foot speed and you will notice that you are faster on the mat.

Speed ladders aren't the only way to improve speed however. Simply doing 50 yard sprints allows you to get accustomed to the short bursts of speed that wrestling requires. In my opinion, sprints were one of my favorite parts of training because it not only pushed me physically but also mentally as will almost all of the wrestling workouts.

The prices of some of the products listed can get very expensive but a coach wouldn't expect you as a student to go out and spend $400 on a wrestling dummy. Unless you have the space at home and finances to buy a wrestling dummy then go for it. Also, I didn't list all the workouts that are possible to do when equipped with the weighted vest but if you simply do a Google search for "weighted vest workouts" you will find an endless list of possible workouts to do that will ultimately help out with your wrestling strength and conditioning. 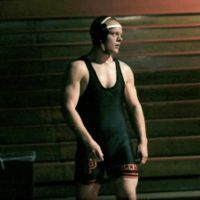 I became very serious about wrestling when I began my freshman year of high school. My coach told me that I had a very high chance of being on the varsity squad that year and reminded me that I can't just come into practice and expect to get better. He told me that if I wanted to succeed on the varsity level I needed to do extra work outside of the wrestling room to become a varsity caliber wrestler. This was some of the best advice anyone in my position could ever ask for.

Other Tips from Tyler

How to Cut Weight For Wrestling

How to Choose a Wrestling Instructional DVD

How To Condition For Wrestling

How to Create Wrestling Practice Plans

How To Make Your Own Wrestling Singlet